My son is in Kindergarten and each year they have a Kindergarten Circus.
It is a 45 minute long program with all sorts of circus acts.
They needed a new monkey costume so his teacher asked if I could come up with something.  They already had a boy version of the vest and hat so I made the girl version so it could be interchangeable.
I asked my son to model the costume...but I had to bribe him with
M & M's because it was a "girl monkey!"
I can get my kids to do anything for M & M's!!
I used Simplicity Pattern 2855 which was really easy to sew! 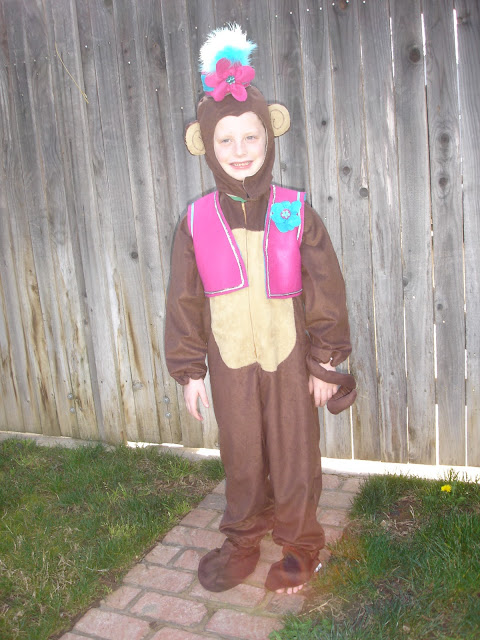 For the tail I added wire so it would curl...so cute! 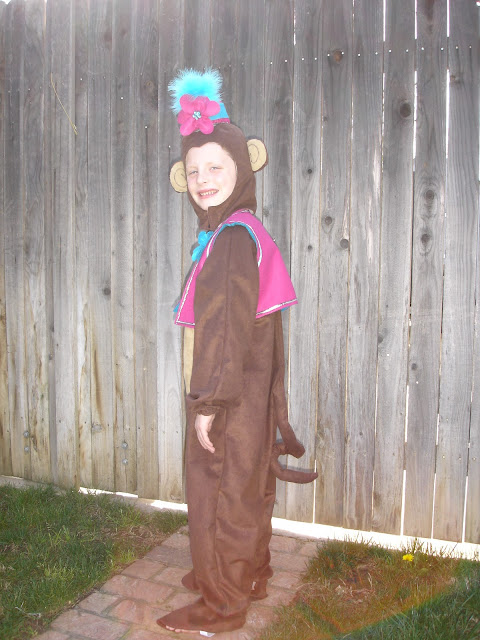 Several years ago Toby's teacher had made a "boy" version of the hat and vest and did a great job so I just traced a pattern from the vest and made the girl version. 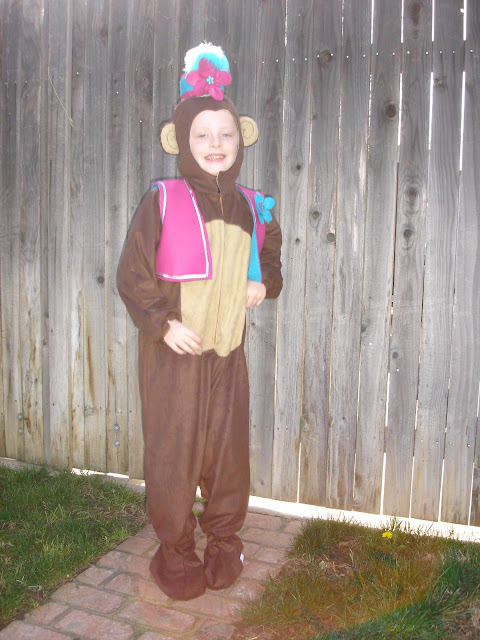 For the hat I cut a large yogurt container down, covered it with felt and added the feather.
I made a flower from felt and glued on a flower jewel to add a little pizazz!
Thanks goodness for a glue gun!
In order to make the hat interchangeable I sewed a large patch of Velcro to the top of the monkey head and then glued Velcro to the bottom of each hat.
I had Toby run around all crazy like (actually that is how he acts normally!) and it didn't come off...mission accomplished! 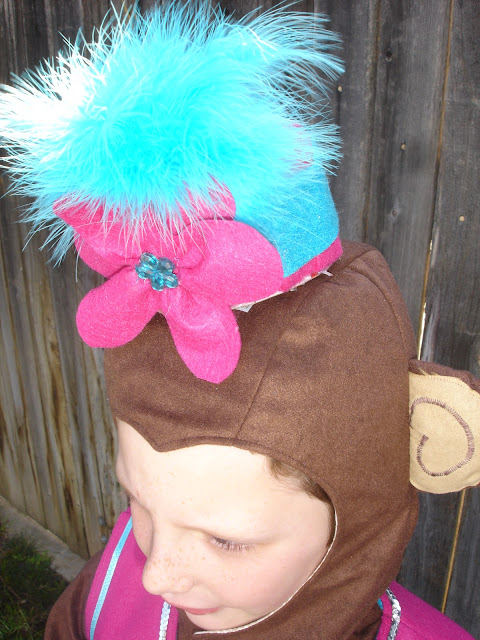 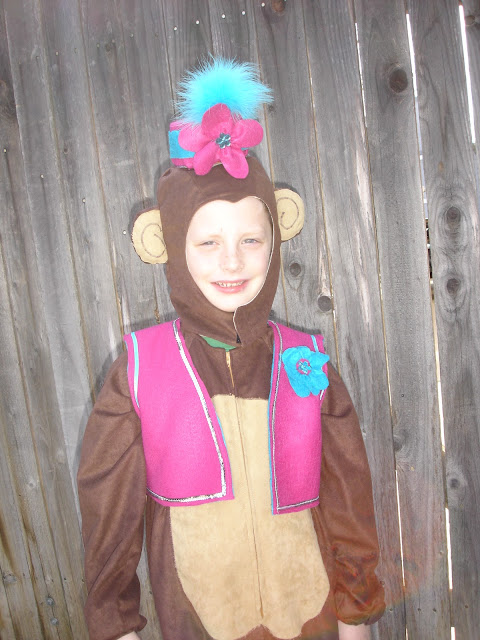 So...while I was out picking up a free Craigslist dresser
(more on that later when I actually dig it out of my garage!)
I found this cute little nightstand for free on the side of the road...What a Night!!
The nightstand was in great condition and solid...I could barely lift it to throw it into the truck. 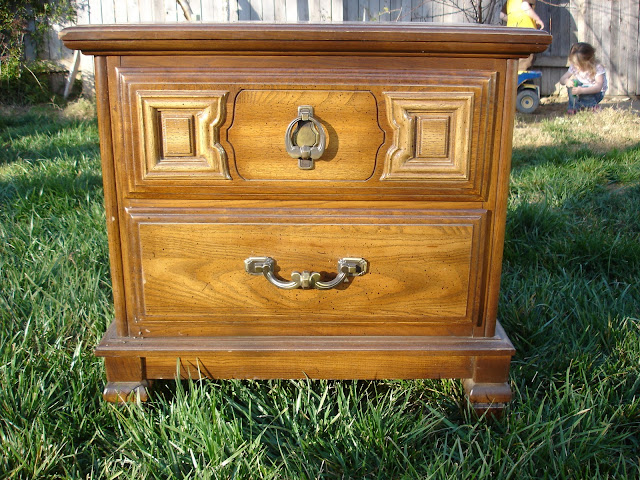 Here it is painted with a deep turquoise color that I mixed myself.
I then distressed and stained it to bring out all of the great lines.
The handles were painted a satin nickel color.
I listed it on Craiglist and it sold a few hours later...always makes me happy! 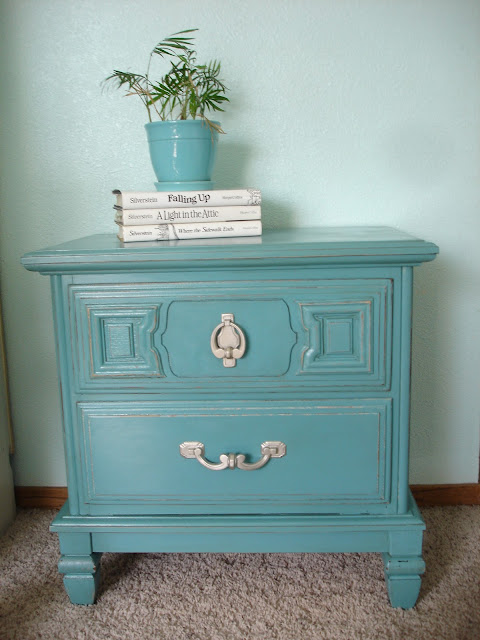 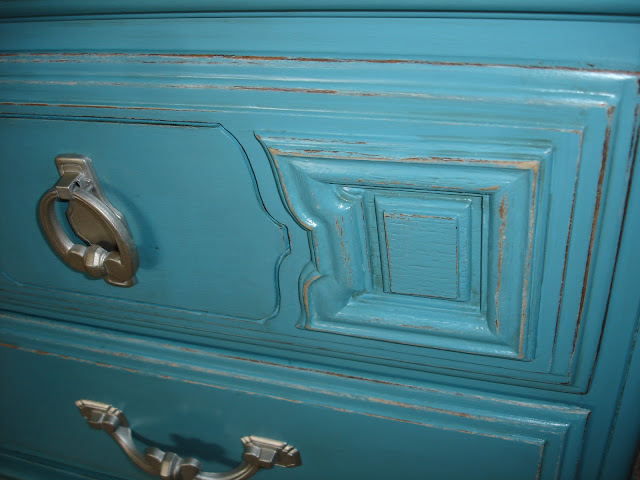 This table was given to me from a friend who was clearing out their
warehouse of props for their clothing store.
It was tucked in a corner and I thought it wasn't wood because of the faux gold paint on it, but then took a second look and threw it in the truck at the last minute. 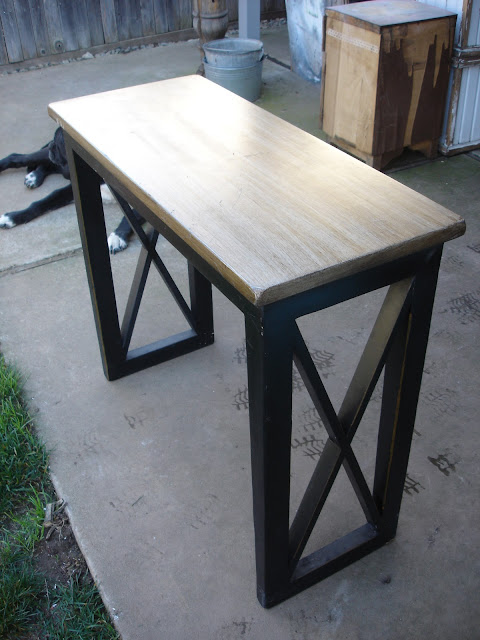 Well a couple days later I found these stools on the that someone was throwing out.
I brought them home and then a few days later
the Light Bulb went off in my head
and I ran to the garage and played with my furniture finds. 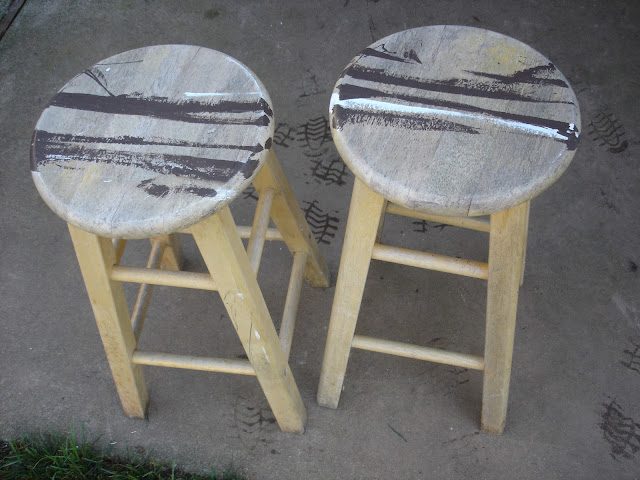 This is what I ended up with!!!
A Match Made in Junk Heaven!!! 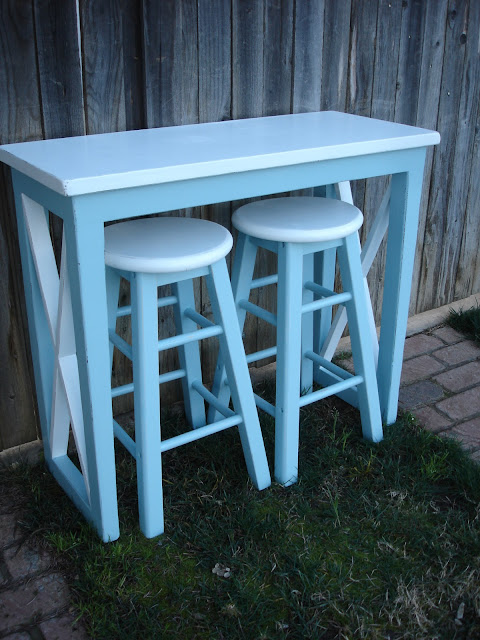 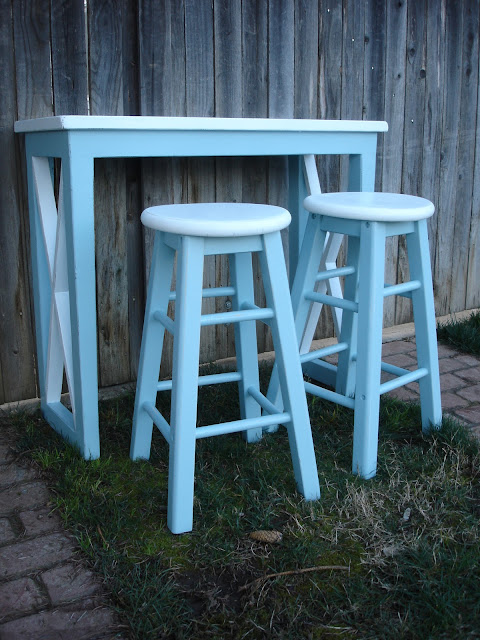 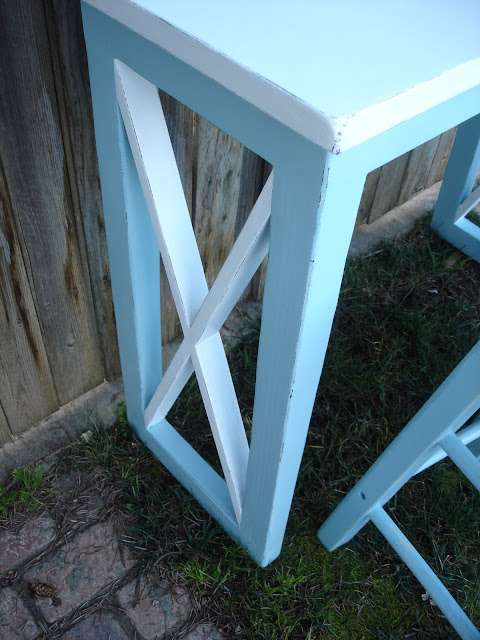 Found this Nightstand on the side of the road.
I just loved the style of the nightstand but what a horrible color!! 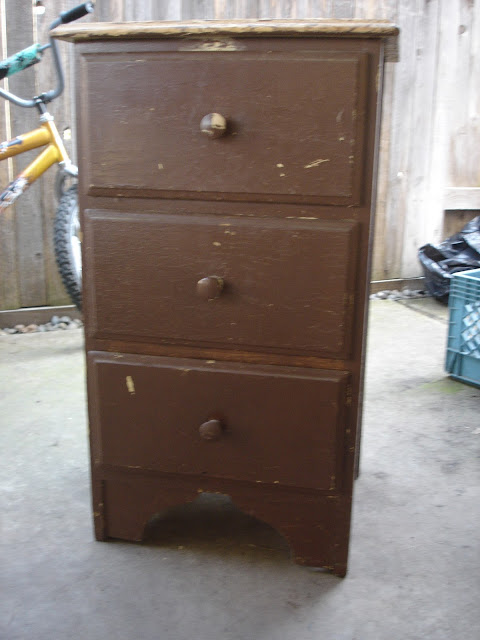 Here is the Makeover.
Light Turquoise paint, a little distressing and some cute knobs!
Now it is perfect for a bedroom, office, kitchen...oh...the ideas! 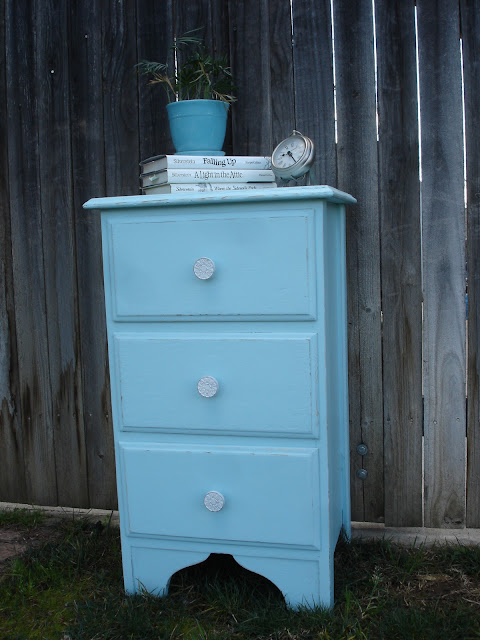 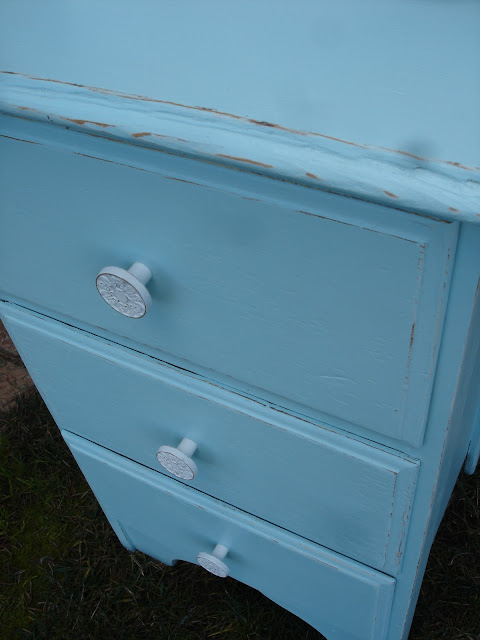 I also just finished this little set of Drawers.
I forgot to take a before picture, but it had decorative metal sheeting on the drawers and side.  The sheeting was peeling off, so I just took off the rest and then painted pink.  I aged it with some stain and gave it some wooden knobs.
It has a real vintage, aged look.
It has velvet lined drawers so it would be perfect for a lingerie, jewelry or craft supplies. 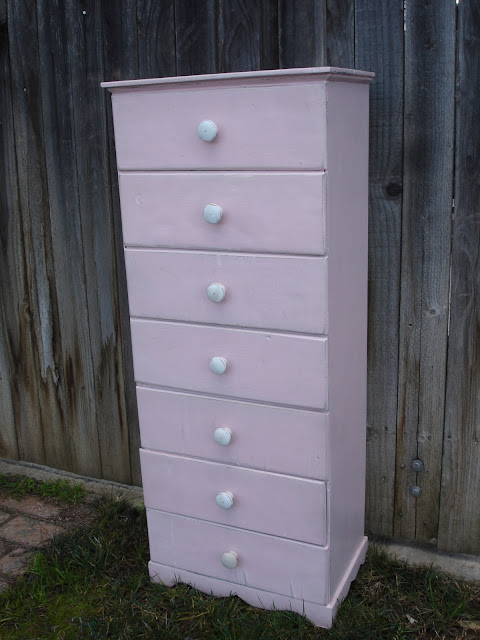 I love looking through the Pottery Barn Kids catalog for Inspiration...
but so does my 3 year old Daughter.
And she doesn't look for inspirations she looks for WANTS.
One day she saw this high chair and WANTED it so badly....
but at $59.00 I told her "Maybe dad can make one for you!" 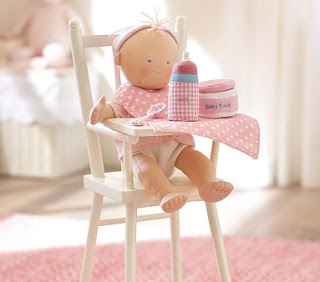 Well he lucked out because on one of my "Junking Adventures" I found this...
Someone had thrown out this vintage highchair.
And though it looks perfect and cute as is, what you don't see is it had been sitting outside in the rain and there was mold growing underneath the seat...gross...gross.
It also had a missing dowel rod on one of the legs.  So Dad only had to fix that which took a couple minutes and about 99 cents for a replacement dowel. 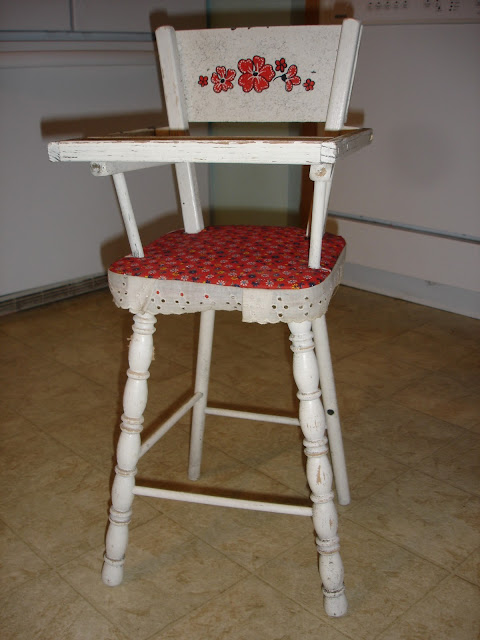 After some scrubbing, bleach and Kilz primer here is the finished high chair.
Of course my daughter wanted it pink!
She is as girly as a girl can be!! 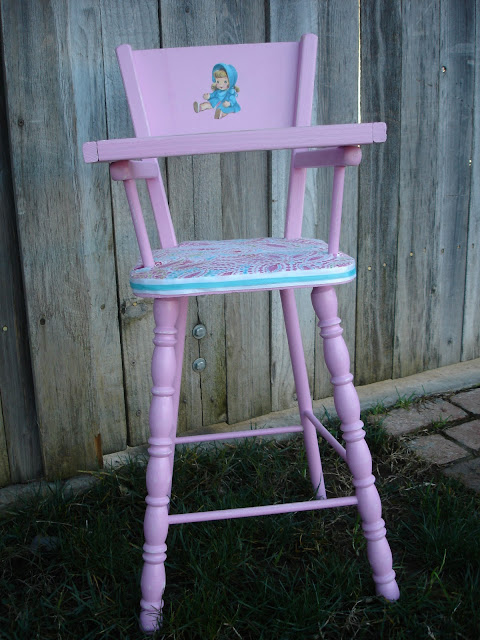 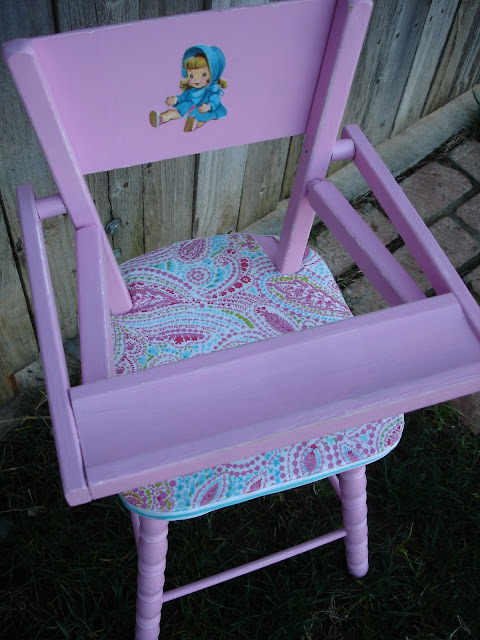