What a fun day we had yesterday as we celebrated the marriage of our good friends.
My husband and I got to spend Father's Day together doing our favorite things...
bar-b-que and desserts! 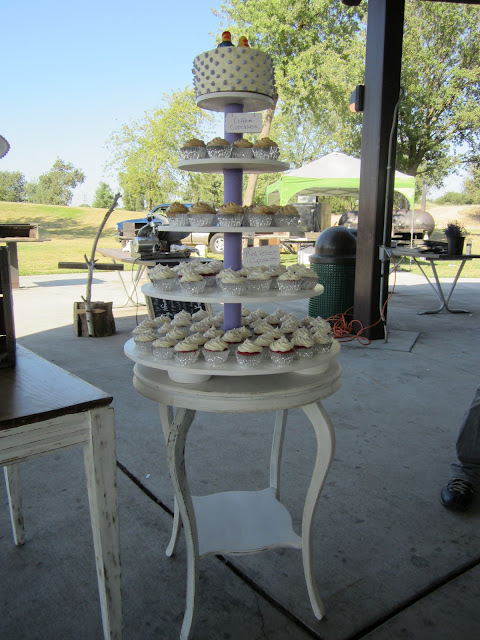 This cute little cake top was made by the couple! 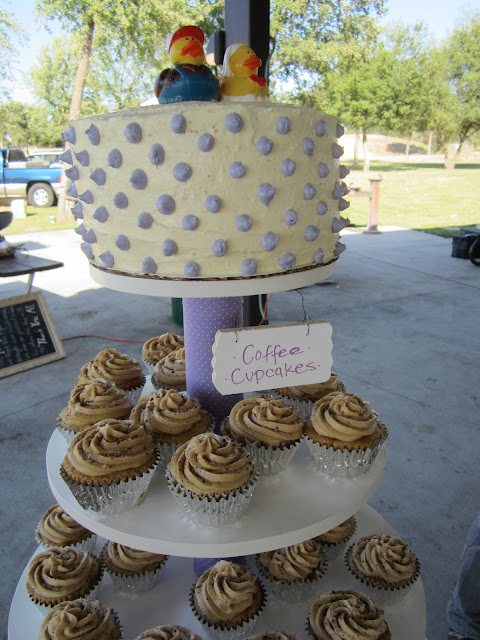 The Bride and Groom each choose their own cupcake flavor and a favorite cookie.  The Bride wanted Red Velvet with Cream Cheese Frosting and Russian Tea Cakes.  The Groom asked for Haystack cookies and a Coffee Flavored Cupcake.  I was having a hard time coming up with an idea for the coffee cupcake without using chocolate.  After some research I found a Brown Sugar Cupcake recipe and made a Coffee Buttercream.  But to make it just a little bit better I filled the  middle with homemade Caramel Sauce...so good!

P.S.  Thank you to my brother who made the caramel sauce...he is a dessert chef so he knows what he is doing! 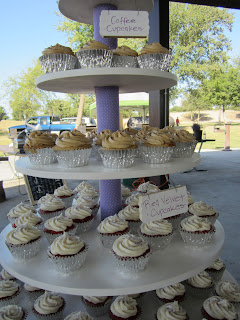 My husband made this amazing cupcake tower for me.  I came to him with this idea and he made it even better.  The cupcake stand can have tiers removed/added to make any size of stand needed for my dessert buffets.  The couple wanted the poles to be purple but I wanted to be able to re-use this stand so I didn't want to paint them.  Then I thought to myself "Why not sew fabric tubes that can be interchangeable for all color schemes?"  Worked Perfectly!! 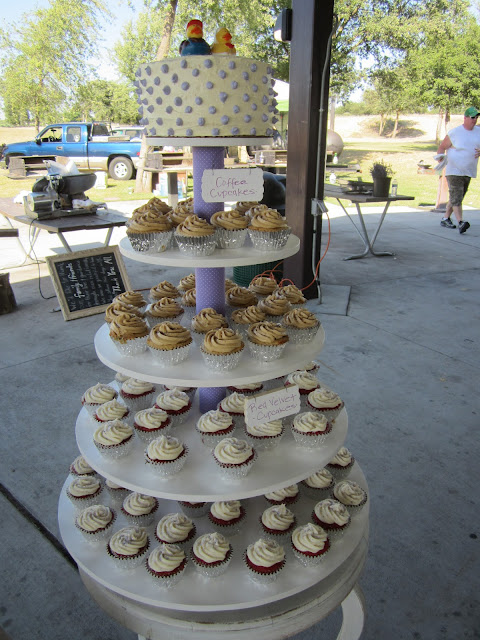 The Dessert Buffet
Gotta love my husband who was willing to pack up my kitchen table!

The only thing I would like to do differently is have a back drop so you don't see all the "extra" stuff in the background.

Oh...I also would have had a little less wind I was so scared the tower was going to tumble over...scary! 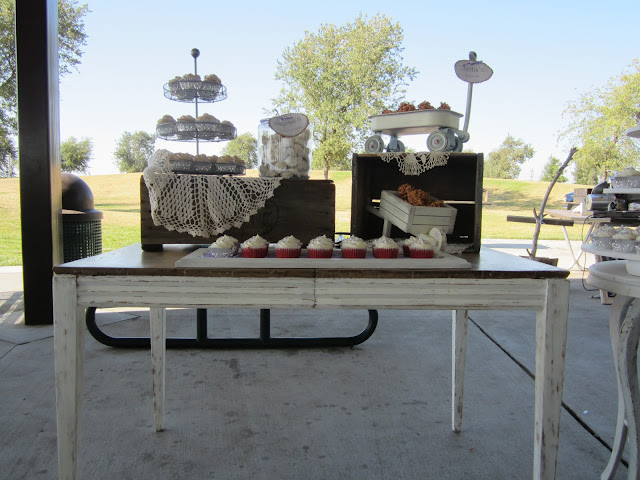 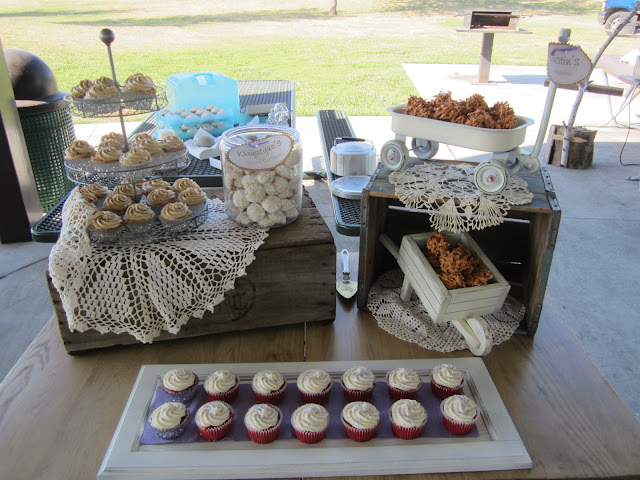 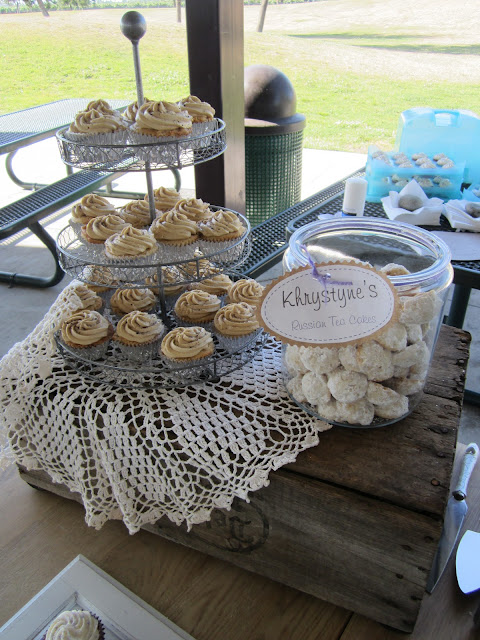 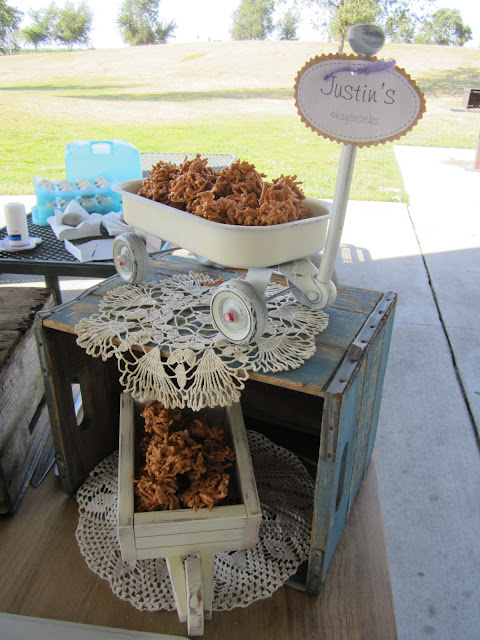 My husbands huge b-b-q.
He designed and made that thing himself!
And in honor of Father's Day let me tell you a little bit about this guy.
He can make, fix, build and do just about anything that my crazy mind thinks up.  He has a degree in engineering and a general's contractors licenses and a mind that goes a mile a minute.  Because of these abilities (and great patients with me and my picky-ness) he is able to put up with me and my ever changing design ideas.
He also is a great Dad...who I think has officially inspired my 8 year old son to want to be a b-b-q chef!

Without him Holly Do. would not be possible. 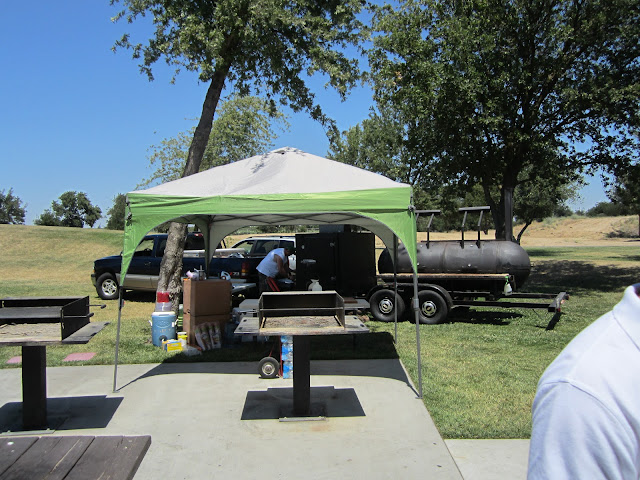